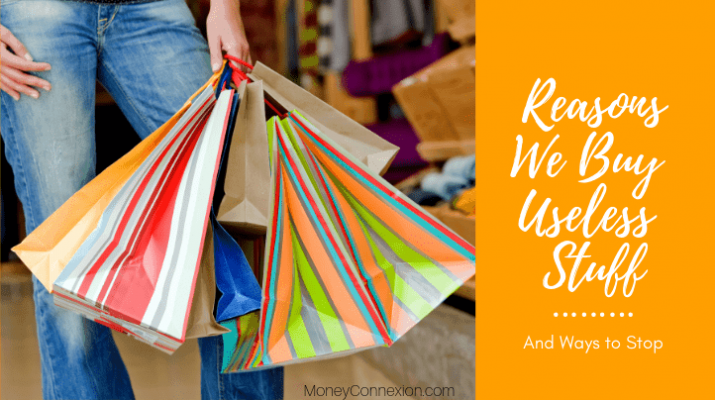 We earn money to spend. We all spend on basic necessities including food, clothing and shelter. And we spend money on justifiable stuff including entertainment and some comfort.

If you have kids, there are inevitable expenses on education too. Understandably, these expenses are unavoidable.

But what about that large amount of money we spend on useless stuff? I mean, stuff that we do not really need or just cannot use for any reason?

Surely, you will find lots of such useless stuff lying around the house.

If you believe only rich people buy useless stuff, think again. Millions of people worldwide with little money also spend on things they never use or have little purpose.

Here are some reasons why we spend precious money on buying unwanted things.

Anxiety and depression are one of the main reasons why millions of people across the globe suffer from something called Compulsive Buying.

The reason: Shopping imparts instant gratification. It tends to raise a person’s mood. And they are willing to do anything, including splurging money they can ill afford, for this sense of well-being.

A lot of us buy useless stuff to impress people. This is sheer waste of precious money. Instead of splurging on items we do not require, the money can be well utilized by investing in savings or retirement plans.

Unfortunately, it is poorer people that suffer from this type of spending on useless stuff. It makes them feel they too can afford stuff that wealthier people have.

Such type of competition and buying stuff to impress others is singularly useless. There are no guarantees you will find acceptance among the wealthier crowd.

Also, you may end up as laughing stock among peers and others for spending on useless stuff. A lot of such stuff needs maintenance too.

Remember, buying is a one-off expense but maintaining something, including an expensive dress, is a recurring cost that eats into your finances.

Credit cards rank among the biggest culprits. They make us spend money on useless stuff. The reason is very simple. When you spend on credit card, the pain of paying cash is clearly absent.

Also, you have that comfort of paying later or in installments. While credit cards are excellent if we use them prudently, they can be a bane for those given to impulsive buying.

Usually, people with credit cards tend to buy more during sales and discount offers or try newer, expensive stuff they really do not need. The result: such stuff usually ends up being scarcely used. Perishables expire and have to be thrown away.

Regardless what you do with the stuff, a credit card issuer will always claim the money.

Failure to pay on time attracts Average Purchase Rate (APR) or a type of interest that can run as high as 32 percent of your bill, when it accumulates.

Thus, you are not only spending money on useless stuff, you also pay a price for the folly.

Ever watched the Hollywood movie ‘Confessions of a Shopaholic’? It is all about a psychiatric problem called shopping disorder. This is a type of addiction and has severe, negative impact on your mental, physical and financial wellbeing.

Understandably, we live in a very consumerist society where commercials and ads of all sort compel us to try and buy something. However, shopping disorder exists since centuries and is nothing new.

They are constantly making plans about when, where, what and how to shop. To fulfill this urge, you might end up borrowing money from relatives and friends or taking salary advances.

A shopaholic stops at nothing. They continue buying useless stuff, even when they have little money. They also create sob stories to make people lend money to satisfy this shopping addiction.

Shopaholics also experience withdrawal symptoms like alcoholics and drug addicts. A shopaholic will usually become very irritable, disoriented and depressed unless they shop.

Shopping addiction is a behavioral disorder. If you spend money on useless stuff due to shopping addiction, there is nothing much to worry about: this disorder can be treated and arrested with professional help.

This happens because you saw something attractive at a store and suddenly felt an impulse you need it. You will not have made plans to buy the stuff or know whether it would be genuinely useful.

Impulsive buying is very common to all of us. We do it several times a year. It is not a behavioral or psychiatric disorder. Hence, you need not panic.

In fact, most impulsive buying occurs when we have sufficient cash or enough balance on credit card. Yet, impulsive buying ranks among biggest culprits for why we spend money on useless stuff.

A lot if impulsive buying occurs among casual window shoppers. You are also at some risk if you are a person that easily gets carried away by claims made on advertisements.

Exposure to such stuff creates an artificial need in our brains. We end up with the fake belief that a particular product will make life easier.

Panic buying is another major reason why we spend money on useless stuff. Panic buying occurs when we fear there would be shortage of something or a price rise is imminent.

We rush to stock our homes with stuff to ensure we have adequate supplies or to save money. In any case, panic buying is one of the reasons why we waste money on buying useless stuff.

Interestingly, panic buying is not a phenomenon that affects poorer countries or people, residents of disaster and war zones. It is also prevalent in developed and developing economies. Food and fuel are two items that are usually hoarded by panic shoppers.

Such panic buying is usually futile. Because foodstuff tends to expire or spoil unless stored with extreme care. And storing fuel can prove very hazardous due to its highly inflammable nature.

Hoarding deprives others who need the stuff. Also, your money remains blocked. Eventually, the price rise or scarcity you fear may never materialize.

Why we spend money on useless stuff? Another answer is to be found in those frequent sales and special offers made by online as well as brick-and-mortar retailers.

These retailers hold sales to get instant cash while disposing older stuff. Special offers attract you to buy. Remember, the retailer loses nothing by making special offers or holding sales.

You lose money because of buying useless stuff only because you believe it is cheap.

Often, something sold at hefty discounts comes with a catch. Special offers are also made to dispose of things that do not commonly sell.

But our thinking hoodwinks us into believing we are getting a great bargain for something. And usually, that stuff is something we do not require.

You may have noticed the amount of money that online as well as brick-and-mortar stores spend on advertising their sales and special offers.

Ever wondered from where this huge advertising budget comes from? It comes from profits made by selling useless stuff to unsuspecting customers like you and I.

You may never have heard this term Emotional Spending. It affects millions of ordinary and perfectly healthy people worldwide. Why? Our emotions drive us to shop and spend money on useless stuff.

Why? Because a lot of us are unable to cope with these emotions. They overwhelm us to an extent that we desperately look for relief or outlet.

Shopping provides relatively safe relief or outlet for these emotions. The joy of shopping helps overcome these insidious thoughts and feelings.

Undoubtedly, we are humans who will undergo various emotional ups and downs. Shopping to overcome these emotions is not altogether wrong.

Unfortunately, we spend on useless stuff when we engage in emotional shopping. Such shopping is more driven by emotions rather than necessary or rationale.

American business magnate and author, Warren Buffet rightly says: “If you buy things you do not need, soon you will have to sell things you need.”

At best, you may donate it to some charity where it may find some use. Despite, you would still have to spend money on carrying it to their premises.