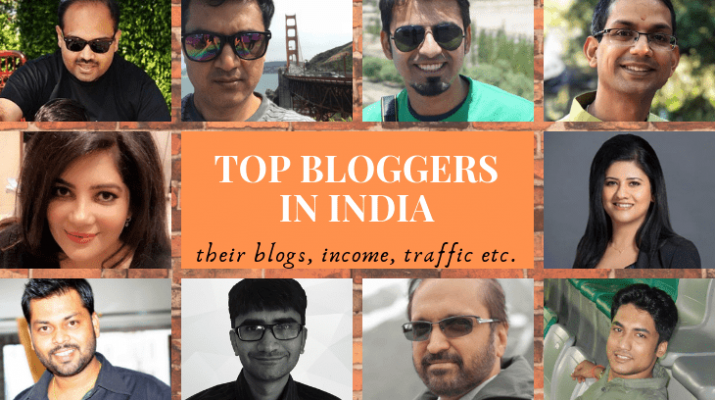 Do you know who are the top bloggers in India who are making millions through blogging?

If you want to become a full time profession blogger and need high level of motivation then you must know about the top bloggers in India, their earnings and their blogging journey.

Though there are hundreds of bloggers in India who makes thousands of dollars monthly through AdSense or affiliate marketing but most of the bloggers don’t reveal their income.

But still I tried to find some 10 bloggers considering many factors like Alexa rank, Ahrefs & SEMRush rank etc.

Blogging is not the only option to make money online. There are many people who make lots of money through YouTube, affiliate marketing, Freelancing etc.

But I consider blogging as the stable source of income.

If you have not started your blog, you must check this post.

I am sure you will get the inspiration after reading the stories of these top bloggers. You can even find lots of tips and ideas about blogging on their blogs.

Amit Agarwal, a techie by heart and a writer by hobby is India’s first professional blogger who pioneered blogging in a true sense.

Originally Amit belonged to a business family in Agra but had a passion for technology so after completing high school he opted for Computer Science at IIT-Roorkee.

In 1999 he completed his graduation and started working for ADP Inc in Hyderabad. There he worked for 5 years on database for clients like Goldman Sachs and Meryll Lynch.

After spending 5 years at ADP he decided to go back to his hometown Agra. In year 2004, he launched a tech blog named Labnol (Digital Inspiration).

Labnol blog was all about taking maximum advantage of software tools and web technologies available. He writes How-To guides about consumer software and mobile apps.

Labnol was an instant hit and became one of the top 100 technology blogs in the world.

Labnol receives more than 3 million views monthly and has been quoted by popular publications like The Wall Street Journal, Forbes, CBNC, Guardian etc.

In 2010, Amit launched India Blog School a non-profit initiative for furthering the cause of blogging in India. He is recipient of numerous awards in India.

40 Years old Amit Agarwal is a true inspiration of all other budding bloggers in the country.

Although I started my first blog in 2009 but was generating online income since 2004. Back in 2004, I was doing affiliate marketing for eBay and other companies through CJ.

Today my total income from blogging is more than $1 Million. Recently I became a proud owner of BMW 5 Series 520d luxury line, one of the most luxurious cars in India.

Initially, I failed with blogging for almost 2 years but I didn’t give up because I was quite sure about my success.

I was born and brought up in Kota (Rajasthan). I came to Mumbai after completing my engineering from one of the most prestigious college LIT Nagpur.

I worked for many odd jobs and side businesses like network marketing, computer hardware sales, mushroom farming etc.

Going to a cyber cafe and searching for online income opportunities was my hobby. After 3 years of hard work this hobby was converted into a full time online business.

You can read more about me here.

Harsh Agarwal is an engineer by education but a blogger by profession. His blog ShoutMeLoud is one of the very popular blogs in India right now.

In 2008, Harsh Agarwal graduated as an engineer and took his first job at Accenture. After working for only 5 months at Accenture he decided to quit his day job and opt for blogging as a career.

In 2009 he launched his blog named ShoutMeLoud.

Between working at Accenture and blogging he chose blogging as a career. According to him this was his life changing event.

However, in June 2009 he met a terrible accident and was bedridden for entire seven months. However Harsh didn’t stop blogging, he worked day & night and blogged from his hospital bed.

Soon his blog was an instant success among other bloggers in the country getting over 1 million page views a month. His blog focuses on blogging, making money online, SEO, business blogging, social media, WordPress and everything related to “Internet Marketing”.

ShoutMeLoud has over 1 million subscribers and gets over 1.5 million views every month.

One of the unique aspects of Harsh Agarwal is that he shares his income every month with all other bloggers on his website. He stopped publishing his income from last few months.

Shradha Sharma is India’s top women blogger who is founder and Chief Editor of YourStory.com. Before founding YourStory in the year 2008 she worked as an assistant vice president at CNBC TV18 and a brand adviser at The Times of India.

YourStory is basically India’s one of the biggest digital platform for start-ups and entrepreneurs related stories and news. They work to bring India’s best and brightest entrepreneurs to the fore.

In last 10 years YourStory has published over 60,000 stories about entrepreneurs on their blog. YourStory has a team of 5 to 6 bloggers situated in Bangalore.

Unlike other bloggers in this list, Shardha Sharma has a long background in mass media before launching YourStory. Her site receives over 1 million views every month generating revenue over $20,000/month (approx.).

Usually blogging is considered to be realm of younger generation however Anand Khanse a 56 years old blogger from Pune is an exception.

Anand a businessman entered the world of blogging by launching his blog TheWindowsClub in April 2009. His blog is an online source that helps amateurs to fix their Windows operating system on their own.

Later the blog also started offering freeware software like Windows Tweaker and the FixWin Windows repair tool to its readers. Right now TheWindowsClub offers more than 80 Windows Freeware making it one of the largest online resources for Windows OS.

His site receives more than 10 million views per month from around the world. Anand earns enough from his blog that it allowed him to quit his 9 to 5 job.

Before taking a plunge into blogging he worked as a web publisher for over 9 years.

GuidingTech is a pure tech blog where they teach people how to use gadgets like a Pro through in-depth guides and how-to articles. GuidingTech also writes reviews on Operating system, software and online tools.

Apart from running the GuidingTech blog, Abhijit also runs a YouTube channel in English and Hindi both.

GuidingTech receives over 1 million views every month. Abhijit earns well over $15,000 per month through contextual ads and other revenue streams.

Most of the bloggers mentioned in this article cover either technology or business. However, Nandini Shenoy’s Pinkvilla is a fresh breath of air for those bloggers who want to start a blog on a niche other than technology and business.

Pinkvilla launched in 2007 focuses on bollywood news, gossips, entertainment and fashion. You will be surprised to know that Pinkvilla blog founded by Nandini Shenoy is managed from US.

After completing her graduation Nandini moved to USA for Master’s. In 2004, she landed a job as a software engineer at Microsoft. However, Nandini was more interested in bollywood news and film industry in general.

So she decided to start Pinkvilla website with her husband. However she didn’t quit her job right away. In 2008, party photos of Sonam Kapoor on her website went viral and started receiving a lot of viral traffic.

In 2013 she was able to set up an editorial team in Mumbai sitting in USA with no contacts in India.

Right now Pinkvilla site gets over 8 million visitors per month contributing to over 50 million page views.

Arun Prabhudesai an avid internet geek and IT professional is founder of business and technology blog called Trak.in. Despite being a civil engineer by education he worked in IT industry since 1996 for more than 10 years.

After coming back from USA he wanted to do something on his own and launched Trak.in blog on 1st May of 2007. Trak.in focuses on business trends in India, entrepreneurship and start-ups with an Indian twist to it. However, Trak.in sometimes also drifts into Technology and Web 2.0 also.

The unique thing about Trak.in blog is that unlike other hardcore technology blogs it writes on business side of things. His blog is different than other mainstream tech channels because he brings his own unique perspective to things. The blog receives over 200K visitors per month.

He earns well over $15,000+ per month from both Trak.in blog and Trak.in Tech YouTube channel combined.

Arun Prabhudesai has also got passion for photography.

iGeeksBlog is one of the only Indian blog which covers Apple Products like iPhone, iPad, MacBook Pro, Apple watch etc.

Unlike other technology blogs iGeeksBlog explores Apple products specifically. The blog was founded by Jignesh Padhiyar and Dhvanesh Adhiya who were so inspired by Apple CEO late Steve Jobs that they decided to start a blog focusing on Apple products particularly.

Their blog receives over 1 million visitors each month. Jignesh estimated earning is well over $10,000 per month.

He graduated in 2002 with a degree in Computer Science and Mathematics from Emory University, Atlanta USA.

In 2007 he started OnlineTechTips and after 3 years in 2010 he quit his day job to work as a full time blogger. Before starting blogging he worked over 15 years in IT industry.

The OnlineTechTips was created to provide readers with daily computer tutorials, technology news, software reviews and personal computing tips. He has written over 3000 articles on topics like Windows, databases etc.

So these were 10 bloggers in India who can inspire you to do the same. You take an inspiration from them and their personal life to start your own blog in any given niche.

Do you know any top Indian blogger that I missed in this list? Then write about his name and blog so that I can do my research and add him/her in this list.